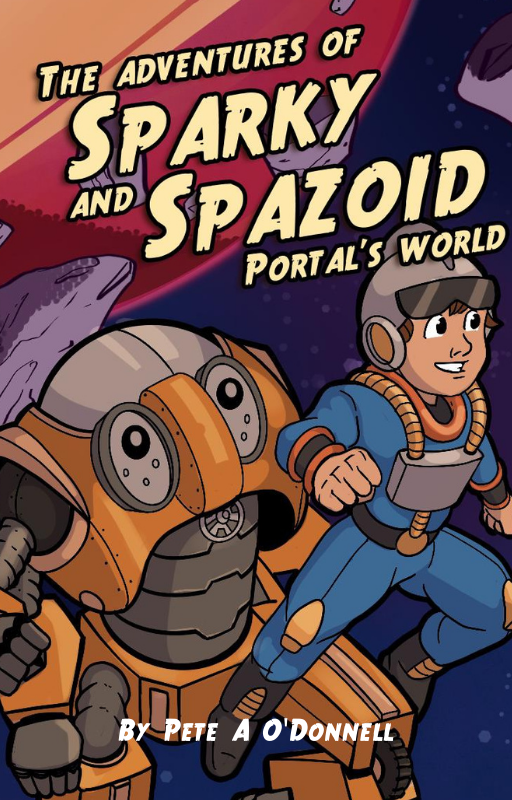 Or check out the Ebook 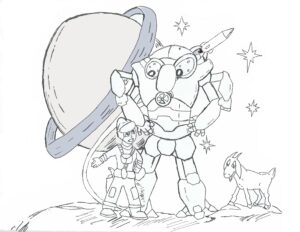 The last of humanity is frozen like popsicles, traveling from star to star. These guys, Sparkie and Spazoid have to find the popsicle-people a new home. No pressure right? Unfortunately the partners have crashed on alien planet. They’re going to go through some evil, face-hugging, Easter-bunnies monsters to get their rockets back. On the way, they’re joined by a complaining goat and an insane alien robot.

Click on the pics to get an early look at some of the illustrations.

Meet the Boys on The Way to The Ground

High above the surface of an alien world, our heroes plummeted toward the ground.

“We’re in trouble,” Spazoid’s voice echoed through the cockpit.

“We’re still flying, aren’t we?” Sparkie asked. His hand was on the center stick, pulling back hard. The glass canopy above his head glowed red as the wind screamed by.

“No, what we’re doing is falling. And those things that flew past us—”

“Yeah, the floating rocks. That was weird.” Sparkie looked back at the mountain they scraped. There wasn’t anything under it. It hovered in the air, moving in the breeze like a cloud.

“Yes, they were odd, but that’s not what I’m talking about. I meant the other things that went flying by. Those were thrusters, my thrusters! When you flew us into that rock, you knocked them off,” Spazoid accused his partner.

The explorers were headed toward the alien planet anyway, but the plan was to get there in one piece. Thrusters would’ve helped with that.

“Technically, the mountain knocked them off,” Sparkie shot back. He was still holding the control stick, trying to pull his ship, which was also his friend Spaz, out of a steep dive. The panel in front of him counted down as the surface of the planet came closer and closer.

“You should probably let me fly,” Spaz wanted to be on his way back to the Ark, their mothership, a lifeboat for the human race. The giant spaceship had taken a spin around this planet and hurtled away. Motherships weren’t big on stopping.

That’s where Sparkie and Spaz came in. Their job was to drop down to strange and dangerous alien worlds and see if they’d make a decent home for the human race. Usually, Sparkie and Spaz could catch up with their mothership as long as they had three working rockets.

So you see their problem.

“Letting you fly is no fun. Besides, are you saying you saw that mountain?” Sparkie looked around to make sure no more peaks came sneaking up on him, as mountains sometimes do.

In the snug cockpit, turning around wasn’t easy. It was big enough for a kid. To all appearances, that’s what Sparkie was, a ten-year-old boy wearing a space suit and helmet. You might ask, ‘Why choose a boy to save the human race?’ Well, it’s complicated, so we’ll get to it later—like way later, maybe not even in this book. Just know that Sparkie is a special sort of ten-year-old, and he has a pretty good chance of dying before this chapter is done. So stick around.

Back to Spazoid, the complaining spaceship. “Yeah. In fact, I warned you about them but you thought they were cool.”

Spazoid started, “But did you have to ignore me when I yelled—”

“TOO CLOSE,” Sparkie interrupted while twisting the stick hard, avoiding another peak that snuck out of the clouds. Like the others, it floated in the air, weightless.

“What’s up with these things? Why are they like that?” Sparkie looked back over his shoulder.

“Hard, big or floating? Which one do you think I mean?”

“It’s probably the energy you wanted to check out. The reason you suggested landing on this planet even though it would make a terrible new home.”

“Is that what’s causing this?” Sparkie asked.

Spazoid didn’t feel like talking about it, focusing on the problem at hand, their eventual crash. “All I know is something happened on this world, something bad,” he said in a dark, ominous tone.

Sparkie nodded then his face broke into a smile as a thought occurred to him. “How ‘bout your parachutes? You got those, right?”

“What? No, we’re going way too fast. They’d rip right off.” Spazoid was annoyed that the kid had thought of it first.

“So slow us down.” Sparkie could see one last thruster stuck to Spazoid’s tail fin. They’d shut it down earlier when they lost the other two, afraid using it by itself would put them into a spin. “Just turn that one around. Do your adaptive thing.”

It was mentioned earlier that Sparkie was complicated, but he’s not the only one. The same could be said of Spazoid. Don’t worry, I won’t make you wait to find out why. See, now Spazoid was a spaceship, or more accurately an Orbital Insertion Device. In fact, his entire name stood for Simulated Personality Adaptive Zero Gravity Orbital Insertion Device.

If that’s not complicated, I don’t know what is.

“We’re going a thousand kilometers per hour. Do you know how fast that is?” Spaz asked.

If Spaz could’ve crossed his arms and stared at Sparkie, he would’ve. Of course, as a spaceship, without arms, that wasn’t an option. But the ‘Simulated Personality’ part of his name made him want to.

It was the ‘A’ that mattered most now. It stood for ‘Adaptive. Which, in his opinion, was a shabby definition of his abilities. Being ‘Adaptive’ is very useful, as we’re about to find out.

Sparkie was still looking back, waiting for his friend to start changing. It was only a small change this time. The thruster attached to his tail fin, wiggled to one side then the other. For a moment, it looked like it was going to fall off, but then it fired a short burst, giving it enough force to spin around.

It locked into place, pointing in the opposite direction. “Can I please have the controls?” Spazoid asked.

“I’ll handle it.” Sparkie reached for the stick but before he touched it, the thruster burst with flame.

“Oh, you did? I’m sorry, I was busy ignoring you. Now leave me alone while I try to control myself.”

Sparkie sat back in his seat crossing his arms and grumbling. Reversing the thruster was his idea, and this was his mission, but it was a simple fact that you couldn’t pull rank on a guy when he was your ride, or when you were riding in him.

Short bursts came from the thruster while Spazoid opened all his flaps, creating drag across his stubby wings.

Sparkie looked at their airspeed. It was dropping, but so was their altitude which is the distance between them and the hard surface of the planet. “About those parachutes. You know the ones you were going to open when we slowed down enough?”

“Any plan on using them?”

“What about them?” Spazoid asked.

“Don’t worry. I have no intention of crashing again.”

“You knocked my thrusters off! That’s a crash.” Spazoid’s voice turned high and tight in astonishment.

“We were flying. We hit a rock. Hence crash.”

“Man… Fine. Call it whatever you want,” Sparkie glanced at the altitude. “But yours is going to be so much worse if you don’t use those parachutes.”

There were a few more bursts from the thruster. “We’re still going too fast.”

“Yeah— TOWARDS THE GROUND!”

“Fine. Here you go then.” There were two small popping sounds. Sparkie heard the lines running out from Spaz’s back. Sheets billowed up into the air and filled like balloons. Then there was a hard tug. By ‘tug,’ I mean a gut-retching jerk, that slammed Sparkie’s jaw shut.

The parachutes pulled them to a sudden stop— Okay, it wasn’t a complete stop. They were still falling, but now they were moving at a more leisurely pace towards the mysterious planet below. Thick clouds made it hard to tell where the ground or the floating mountains were.

“Did you enjoy that? Because I sure didn’t,” Spazoid asked.

“I’m, um— fine.” Sparkie tried to clear his head. His whole body felt like it’d been smashed with a rock. He blinked a few times, but he was still fuzzy. When he looked outside the canopy, he saw what was indeed, a giant rock.

It took him a moment to realize that they were falling past another one of those floating mountains. It’d come out of the clouds directly in front of them. He watched as cracks and crevices went by. Then suddenly, they stopped.

“What’s not good?” Sparkie asked, still feeling jarred from their first stop, which was a drastic slowing. By comparison, their second was mild. They were gently bouncing off a cliff, blowing in the breeze.

“Our parachute is stuck.”

Spazoid let out a long breath. He, of course, didn’t need to breathe, but as his ‘Personality’ was ‘Simulated,’ he allowed himself such human expressions of frustration. “Yes, I’m saying I did it too.”

“Ha, see, these mountains are tricky.” Sparkie unbuckled his safety harness and climbed to the edge of the cockpit. Far below them was the dark surface of the world. “So, um, how do you suppose we’re going to get down from here?”